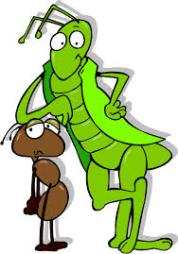 Once upon a time in a grassy meadow, there lived an ant and a grasshopper. The ant worked very hard collecting food from the farmer’s field far away. All day long, without stop or rest, she scurried back and forth, collecting the grains of wheat, and storing them in her larder.

As she worked, the grasshopper would look at her and laugh. “Why do you work so hard, Ant?” he would say. “Summer is here, and the days are long and bright. Why waste the sunshine by working the day away? Come, rest a while. Listen to my song.” But the ant would ignore him, steadily continuing on her path to and from the field. “What a silly little ant you are!” the grasshopper would call after her, and the grasshopper would hop away across the meadow, singing and dancing merrily.

Time passed, and the seasons changed. It grew cold, and snow began to fall. Suddenly, the grasshopper realized he had no shelter and nothing to eat. “Oh, what will I do? Where will I go?” he wailed. Suddenly, he remembered the ant. “Ah ha! I will go to the ant and ask her for food and shelter,” declared the grasshopper. So off he went to the ant’s house and knocked on her door. “Ant,” he said, “you’re in luck! I’ve decided to come and sing for you while I warm myself by your fire and while you get me some food from that larder of yours.”

But the ant just looked at the grasshopper and said, “All summer long I worked hard while you made fun of me, and sang and danced. You should have thought of winter then! Find somewhere else to sing, grasshopper. There is no warmth or food for you here.” And the ant shut the door in the grasshopper’s face.[1]