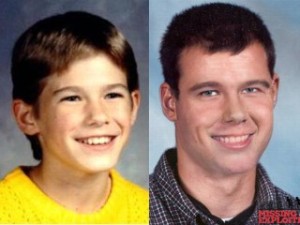 It was 24 years ago today that a little boy named Jacob disappeared near St. Joseph, MN. Jacob, his brother, and a friend of theirs were riding their bikes along a country road when a man with a mask and a gun came out and forced them into the ditch. The man released Jacob’s brother and his friend, telling them to run to a nearby woods and not look back. If they dared to look back, he’d kill them. And run they did … but they also looked back, and when they did, they saw the man leading Jacob away.

That was the last time anyone saw Jacob Wetterling. Any school child growing up in Minnesota – and perhaps the rest of the country – heard Jacob’s story in school assemblies year after year. We were warned of the danger of strangers. We were taught to yell and scream … though I don’t remember anyone ever mentioning what good that would do on a deserted country road.

Being only 5 or 6 years old at the time, I don’t remember news coverage from Jacob’s story. But I remember my parents’ reactions. I remember crushing bear hugs – hugs that felt stronger and lasted longer than “normal hugs.” I remember a long period of time when Mom held my hand a little tighter when we were out and about. I remember not being able to play outside by myself. And I remember the looks – looks extra-full of love, looks that had a hint of sadness behind them that I didn’t understand, looks that would flit to anyone else around us and shift from love to suspicion (though, of course, I was too young to name it at the time).

When he was taken, Jacob was 11 years old. Today, he would be 35. He might have a great career. He might have a family of his own – a wife and children that love him. He might live in the cities … or a small town … or somewhere in between. He might coach little league or some peewee football team. The list of “he mights” is long and wholly unknowable.

This disappearance always made me sad, but this year, with our boys growing by leaps and bounds every day, it strikes a new chord. There is a new ache when I think about Jacob – a deeper ache that also makes me sick to my stomach. Before (once I got a little older, anyway), my head understood the crushing bear hugs and the extra hand-holding and the sadness behind the looks of love and the suspicious glances. Now, my heart understands them as well.

One response to “Remembering …”