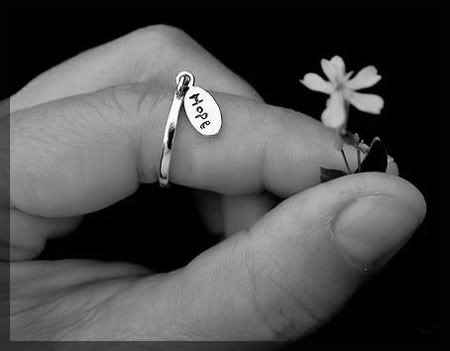 Jesus’ story of the prodigal son …

A father has two sons. The younger son decides he wants his inheritance early, so the father divides all he has and gives the younger son his share. The younger son goes off and squanders his early inheritance on “extravagant living.” When his money runs out and he begins to be in need (desperate, desperate need!), he decides to return home to his father and beg for forgiveness. While the younger son is welcomed home with open arms and a feast to end all feasts, the story ends with the older son frustrated by this welcome and the father reminding the older son that what was lost has been found. (Luke 15:11-32)

Often, a reading of this story is accompanied by a message about forgiveness – about redemption and being welcomed home. And yes, that’s certainly something we hear in this story.

But the story of the prodigal son is also a story of hope. We see the first glimmer of hope in the younger son’s initial “bright and shiny” vision for an amazing future full of all those things that he didn’t think he could find back home on the farm: excitement, adventure, and a lavish lifestyle.

Then reality comes screaming in in the form of pig food that is starting to look appetizing.

The reality that has come screaming in for us lately has been far worse – much more devastating, much more sobering, and much more painful. We’ve seen senseless and unnecessary deaths – in Orlando, in Baton Rouge, in Roseville, in Dallas, in Turkey, in Nice, and in so many other places. We’re caught in the throes of grief and loss, frustration and anxiety, distrust and shame.

Do we feel like we’ve been trampled down in the muck and the mud and the filth?

And therein lies the hope. Out of the muck and the mud and the filth – out of the appalling circumstances and the suffering – is a way out … a way forward.

HOPE lies in the home itself. It’s a safe place to land. It’s a place that holds all the sacredness and familiarity of memories as well as all the potential for new beginnings – a place to come back to as well as a place to start out from, a place of turning and returning, a place of repentance and renewal. Home is where we come together. Sometimes it’s uncomfortable. Sometimes it’s messy. But it’s the place where we come together.

HOPE even lies in the snarky, crotchety older brother. There is hope in the accountability that we find in his presence – someone to keep us honest, someone to read us as we are, whether we like it or not. And there is hope in the relationship-building and rebuilding that is yet to be: bridges to be built, hearts to be mended, and futures to be imagined together.