One of the lectionary passages for this past Sunday was a small portion of the Walk to Emmaus story (Luke 24:13-49). But I feel like there are some Bible stories that just can’t be broken up into little pieces; they’re so much better and more impactful as a whole. So this Sunday, instead of reading just a snip-it of the Walk to Emmaus story, we read the whole story in chunks, stopping briefly in between to talk about how this ancient story still affects our daily lives and walks of faith. 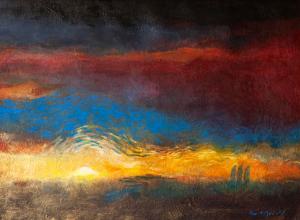 “The Road to Emmaus #2” by Daniel Bonnell

Part I – That same day two of [the disciples] were walking to the village of Emmaus about seven miles out of Jerusalem. They were deep in conversation, going over all these things that had happened. In the middle of their talk and questions, Jesus came up and walked along with them. But they were not able to recognize who he was.[1]

Part II – He asked, “What’s this you’re discussing so intently as you walk along?” Then one of them, his name was Cleopas, said, “Are you the only one in Jerusalem who hasn’t heard what’s happened during the last few days?” He said, “What has happened?” They said, “The things that happened to Jesus the Nazarene. He was a man of God, a prophet, dynamic in work and word, blessed by both God and all the people. Then our high priests and leaders betrayed him, got him sentenced to death, and crucified him. And we had our hope sup that he was the One, the One about to deliver Israel. And it is now the third day since it happened. But now some of our women have completely confused us. Early this morning they were at the tomb and couldn’t find his body. They came back with the story that they had seen a vision of angels who said he was alive. Some of our friends went off to the tomb to check and found it empty just as the women said, but they didn’t see Jesus.”[3]

Part III – Then he said to them, “So thick-headed! So slow-hearted! Why can’t you simply believe all that the prophets said? Don’t you see that these things had to happen, that the Messiah had to suffer and only then enter into his glory?” Then he started at the beginning, with the Books of Moses, and went on through all the Prophets, pointing out everything in the Scriptures that referred to him.[4]

Part IV – They came to the edge of the village where they were headed. He acted as if he were going on but they pressed him: “Stay and have supper with us. It’s nearly evening; the day is done.” So he went in with them. And here is what happened: He sat down at the table with them. Taking the bread, he blessed and broke and gave it to them. And that moment, open-eyed, wide-eyed, they recognized him. And then he disappeared.[5]

Part V – Back and forth they talked. “Didn’t we feel on fire as he conversed with us on the road, as he opened up the Scriptures for us?” They didn’t waste a minute. They were up and on their way back to Jerusalem. They found the Eleven and their friends gathered together, talking away: “It’s really happened! [Jesus] has been raised up – Simon saw him!” Then the two went over everything that happened on the road and how they recognized him when he broke the bread.[6]

Part VI – While they were saying all this, Jesus appeared to them and said, “Peace be with you.” They thought they were seeing a ghost and were scared half to death. He continued with them, “Don’t be upset, and don’t let all these doubting questions take over. Look at my hands; look at my feet – it’s really me. Touch me. Look me over from head to toe. A ghost doesn’t have muscle and bone like this.” As he said this, he showed them his hands and feet. They still couldn’t believe what they were seeing. It was too much; it seemed too good to be true. They gave him a piece of leftover fish they had cooked. He took it and ate it right before their eyes.[9]

Part VII – Then he said, “Everything I told you while I was with you comes to this: All the things written about me in the Law of Moses, in the Prophets, and in the Psalms have to be fulfilled.” He went on to open their understanding of the Word of God, showing them how to read [the Scriptures] this way. He said, “You can see now how it is written that the Messiah suffers, rises from the dead on the third day, and then a total life-change through the forgiveness of sins is proclaimed in his name to all nations – starting from here, from Jerusalem! You’re the first to hear and see it. You’re the witnesses. What comes next is very important: I am sending what my Father promised to you, so stay here in the city until he arrives, until you’re equipped with power from on high.”[10]